A four-member delegation from the City of Fuzhou, China, arrived on September 16 and began working with volunteers in the community to construct a Chinese Ting (Pagoda) on the Chinese Garden and Reconciliation Park site.  This project is supported by the City of Tacoma, volunteer contractors, and the City of Fuzhou.

Lihuang Wung from the Community and Economic Development Department reported on September 24 the progress of the construction: “After three pre-construction meetings (September 16, 17 and 20) and a lot of discussion and preparatory work, we finally kicked off the construction of the Fuzhou Ting on Tuesday, September 21.  At 10:00 a.m., building materials and tools shipped from Fuzhou in three 40-ft containers were delivered to the job site and materials were inspected.  The Fuzhou Delegation, City staff and the contractor met on the site to lay out the detailed plans and job sequences for the next few days.”

The crew also surveyed and chalked the layout on the concrete foundation where the Ting structure will sit on.  Instead of the pink powder line, snappers that are commonly used by carpenters here, the Chinese used “Mo Dou”, which is a line snapper/dispenser with Chinese black ink.  Once snapped on, the lines will stay permanently, said the delegation.

September 22 happened to be the Chinese Mid-Autumn Festival (or the Moon Festival), one of the three major traditional Chinese festivals (the other two being the Chinese New Year and the Dragon Boat Festival).  The significance of the Mid-Autumn Festival is that it is the time for family gathering or reunion.  The Fuzhou guests were thousands of miles away from home and spent more than 10 hours on the job site.  For that, Theresa Pan-Hosley, Chair of the Chinese Reconciliation Project Foundation, treated them with a fine dinner at the Shanghai House in downtown Tacoma.

On Thursday and Friday, September 23 and 24, eight stone columns were erected and four beams installed.  The granite columns are 10-foot tall and weigh at 3,000 pounds each. The major task for the next couple of weeks is the installation of wood components (upper structure of the Ting).  It will be quite a sight to see the traditional Chinese craftsmanship demonstrated by the Fuzhou technicians and performed by the local carpenters. 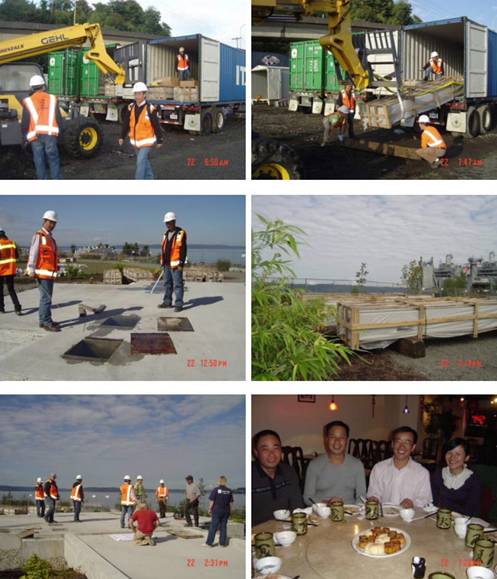 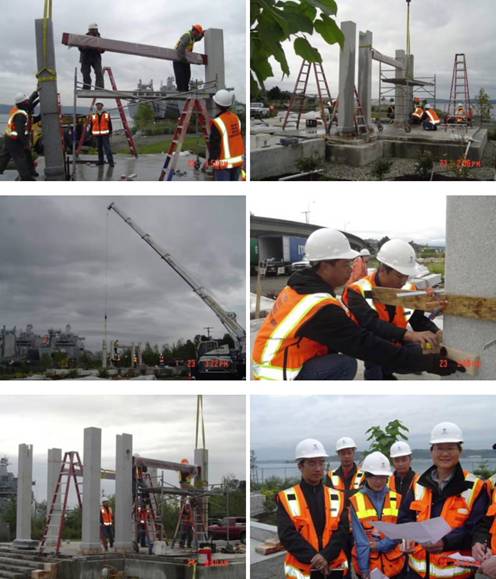